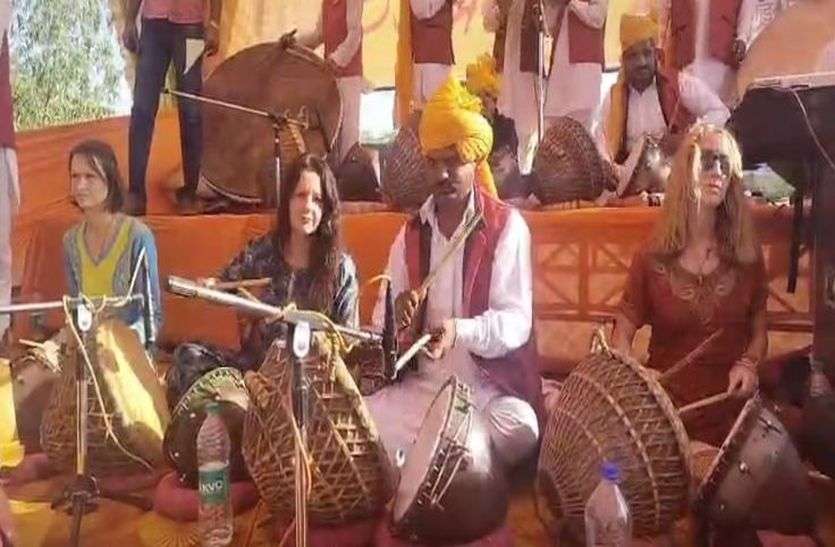 Ajmer. A large number of workers gathered in Ajmer on Friday to welcome former Chief Minister Vasundhara Raje. Reception gates were made at various places to welcome them. The workers were seen dancing to the sound of DJ and Dhol. He was welcomed at various places on the way including the Regional College crossroads here. She was stunned to see the welcome.
Earlier, former Chief Minister Vasundhara Raje reached Pushkar on Friday. Here he visited the Brahma temple. Later, in the middle of the way, sages and sages presented them with shawls and swords and blessed them to win. Vasundhara Raje did not say anything during the Pushkar Yatra. But through his supporters, he made him realize the power.
Presenting the sword to former Chief Minister Vasundhara Raje, Sevaanand Giri, President of Sadhu Samaj, demonstrated at Kaleshwar Mahadev Temple Tirahe said that the people of Rajasthan are waiting for you. During the visit of Vasundhara Raje, the police arrangements were put on hold. Hundreds of supporters thronged the helipad to welcome him with supporters. During the Brahma temple darshan, the supporters walked along with him to the temple during the worship of the temple. On his way to Ajmer, Raje had to stop at the Ramdwara Ashram of the Ramsnehi sect to welcome the saints. He welcomed the problems. Blessed Vasundhara Raje for victory again. Due to this, MLA Suresh Singh Rawat, Bhanwarsinh Palada, former Chairman of Heritage Promotion Authority Omkar Singh Lakhawat, Municipality President Kamal Pathak and others were present on the occasion.